The Highest Quality Move at a Fair Price

The highest quality move at a fair price. 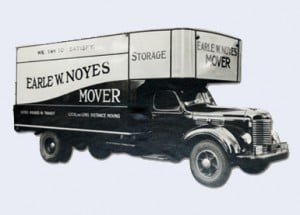 Earle W. Noyes Sr. establishes Earle W. Noyes & Sons by purchasing a second hand REO Speedwagon with $5.00 left over for working capital. He began the business by meeting trains at Union Station and delivering steamer trunks to homes and cottages in Southern Maine. He soon added household goods to his core business, relocating families in Maine and New England. His first warehouse was the basement of his home in the East Deering neighborhood of Portland Maine.

Earle’s son, Lester, joins the business as a van operator and warehouse manager.

The company builds a 50,000 sf. warehouse and office complex at the corner of Franklin and Oxford Streets in Portland, Maine. Earle W. Noyes & Sons introduced high bay palletized storage to Maine with this modern fireproof and heated facility.

Lester’s son, Peter, joins the company after graduating from Michigan State University with a degree in Transportation Administration.

Peter becomes president of the company. Lester becomes Noyes’s chairman of Earle W. Noyes & Sons and is elected to the Board of Directors of United Van Lines.

Lester is re-elected to the Board of Directors of United Van Lines.

Noyes Self Storage is founded after converting the Atlantic & Pacific Warehouse. This is a three story heated brick building featuring inside loading docks and three freight elevators.

Lester is re-elected to the Board of Directors of United Van Lines for a final two year term.

Noyes doubles the size of its storage facility, adding 50,000sf. of space.

Peter’s son, William, joins the company after graduating from the University of Denver with a degree in Business. 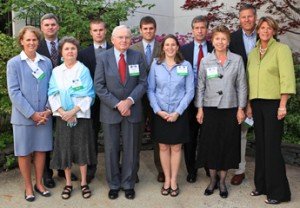 Noyes receives the Family Business of the Year Award in the large-business category presented by the Institute for Family-Owned Businesses.

Peter Noyes elected to the UniGroup Board of Directors.  UniGroup is the parent company of United Van Lines.

Peter’s son, Brent, joins the company after graduating from Boston College with a degree in English and Vermont Law School with a JD and a Masters in Environmental Law.

Peter is re-elected to the Unigroup Board of Directors.

Peter is  re-elected to the Unigroup Board of Directors for a final two year term.

Brent Noyes is promoted to Vice President of Operations.

Noyes Self Storage replaces an original elevator with a new state of the art hydraulic elevator.

Earle W. Noyes & Sons adapts to virtual surveys and other safety protocols in response to the Coronavirus pandemic.