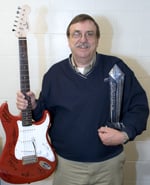 This prestigious recognition is for excellent individual performance in the field of operations and honors the recipient who has consistently demonstrated a passion for exceptional performance, teamwork, professionalism, and achievement of common goals.